HYTE has been gracious enough to allow the team here at LiquidHaus, the opportunity to discuss PC building and modding techniques, directly on their site!

This is our first in a series of blogs, which will highlight our first modded build with their Y60 case!

What is PC Modding, Anyway? 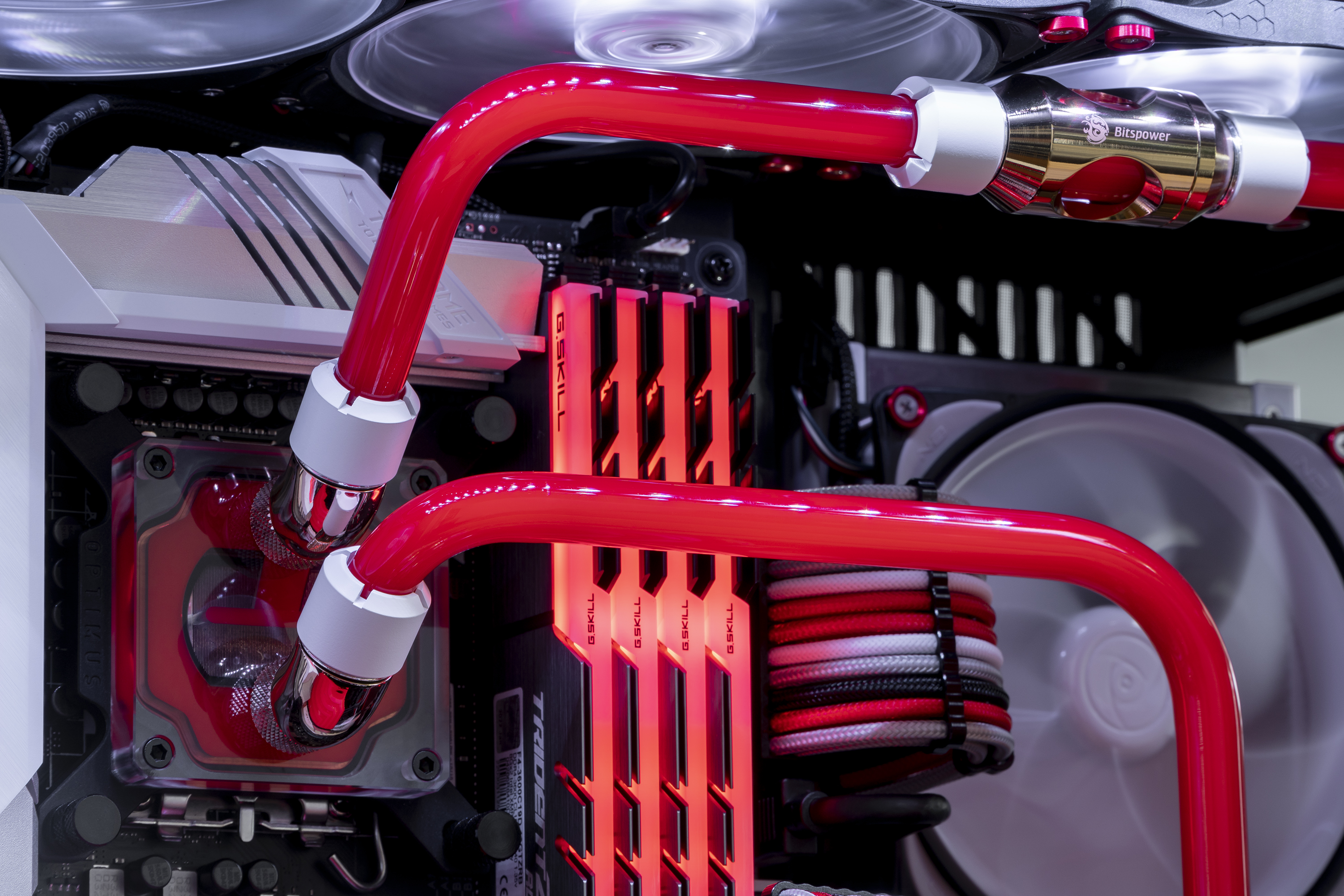 There have been a lot of modifications to PC cases since DIY building began.

The very necessity of mods came during a time when PCs themselves were still relatively new within the world, yet still readily available. “Modding,” came around during a point in time when consumers were extremely limited in what they could achieve with a PC out of the box.

Occasionally, builders would have had the opportunity to overclock the computer’s processor. In this situation, overclocking might mean having to cut away existing panels that had no ventilation, or even adding a custom air duct from the CPU cooler to your newly ventilated case panel. Not to mention adding fans anywhere you can.

Fast forward to now, and PC modding itself is booming! Case companies are working directly with overclockers and modders to provide the best building experience to their customers, which is a great example of how we got here. :) 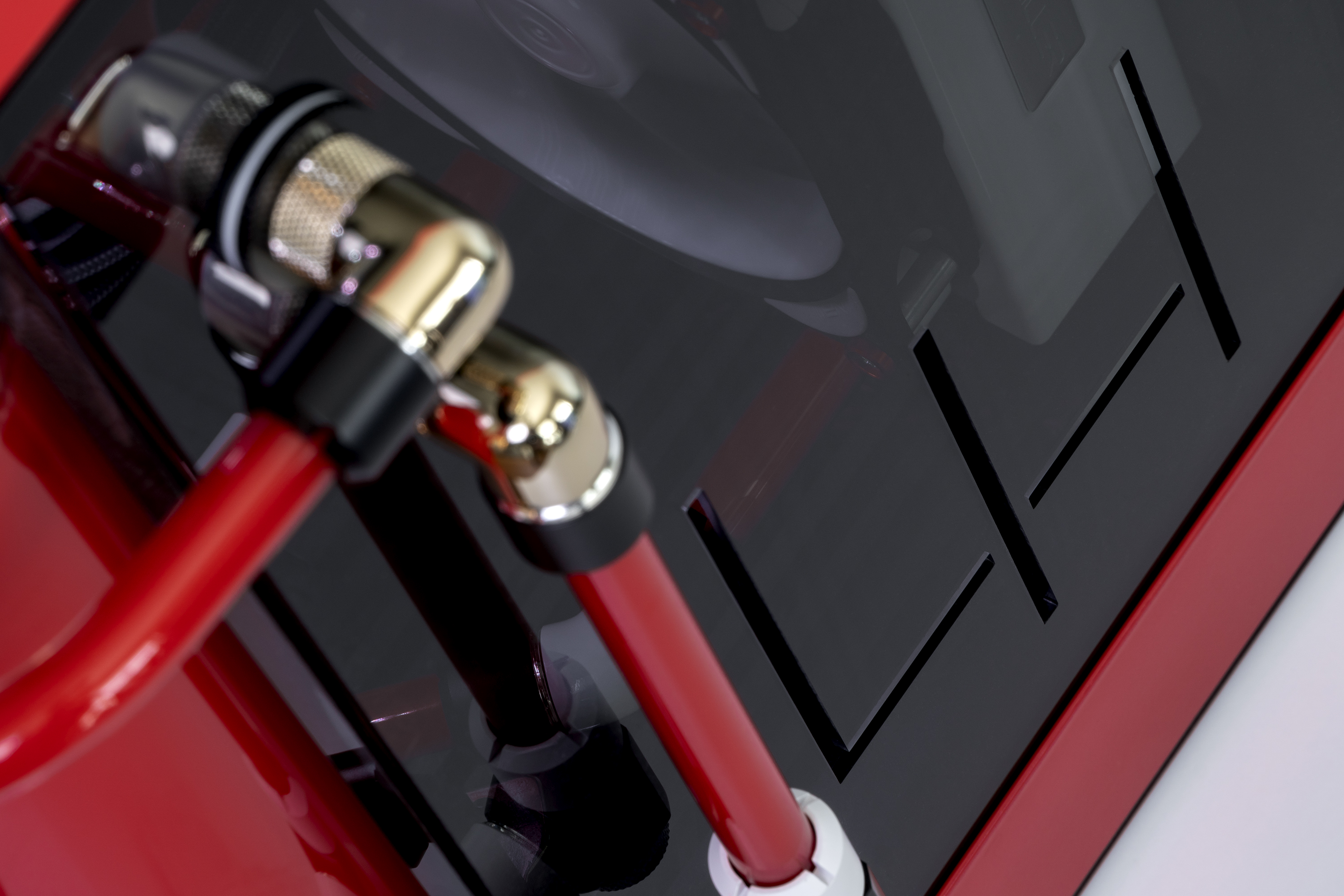 At LiquidHaus, we take pride in doing things differently in attainable ways, with minimal equipment required.

Nowadays, it’s easy to find computers on the internet that have been created utilizing CNCs, lathes, even automotive paint booths. Those are all awesome of course, but the team at LiquidHaus also realizes that 99% of people out there don’t have regular access to that sort of equipment.

Our build features traditional building techniques, along with a little specialized acrylic work and some classic modding, to achieve a unique look.

Before we started modding and building up this PC, we wanted to get a sort of reference or direction on what some of the people at HYTE were looking forward to seeing. Being that this is our second project with HYTE, you can’t do the same mod twice in a row. Like Basher says in Ocean’s Thirteen, “You don’t do the same gag twice, you do the next gag.”

The team at HYTE mentioned that it would be cool to see tubing outside of the case. That was enough reference to go off of, and so the project began.

First Impressions of the Y60 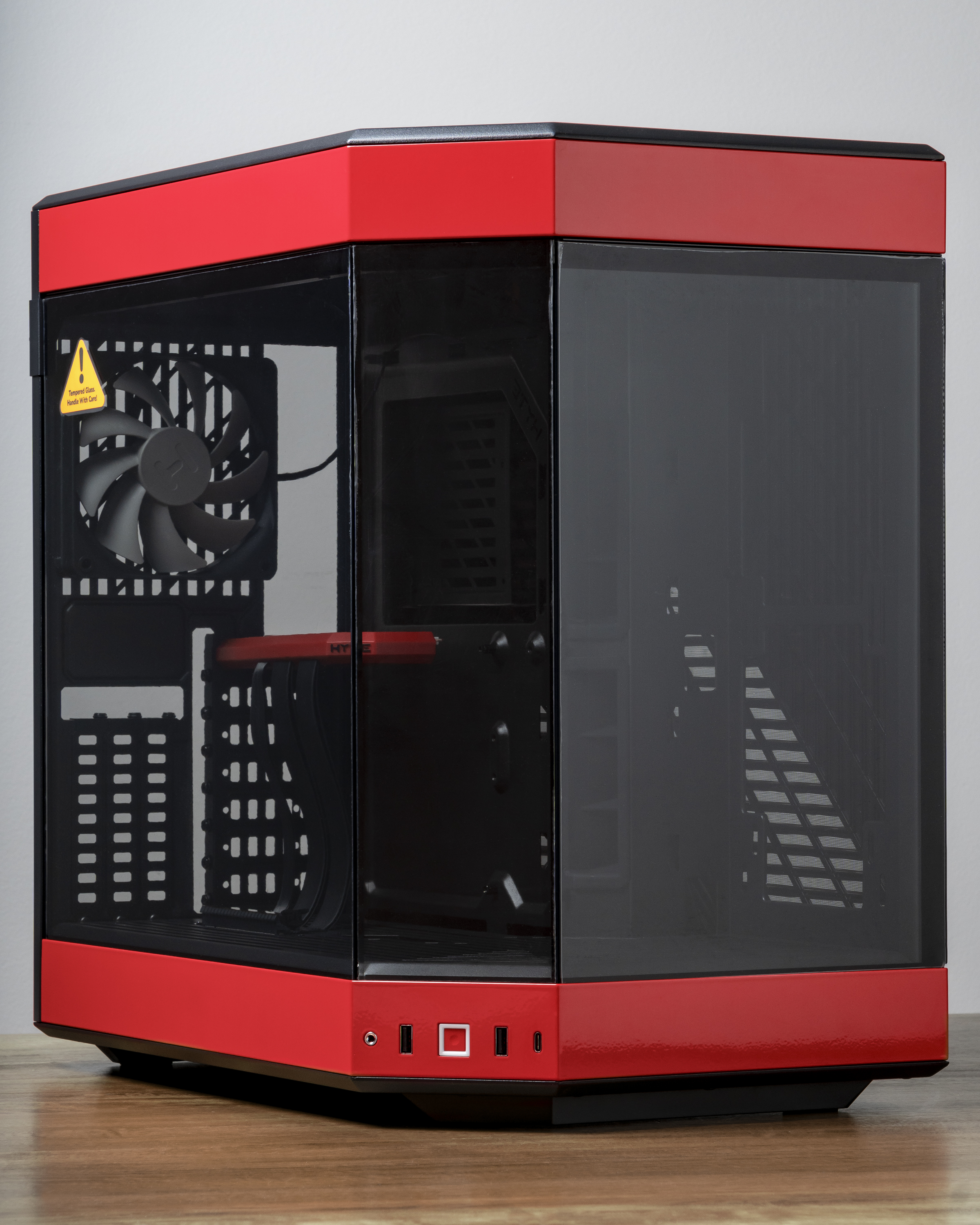 HYTE’s new Y60 case honestly surprised us quite a bit when we first unboxed it.

If you were to unbox this case back when PC modding was first starting up, you would have people thinking it was a fish tank, rather than an actual case. Funnily enough, it seems like the HYTE team themselves thought something similar:

We found ourselves a bit challenged at deciphering what exactly could be changed or modified with the case, that wasn’t already done. HYTE thought of everything.

Watercooling can change how a case is utilized, however. 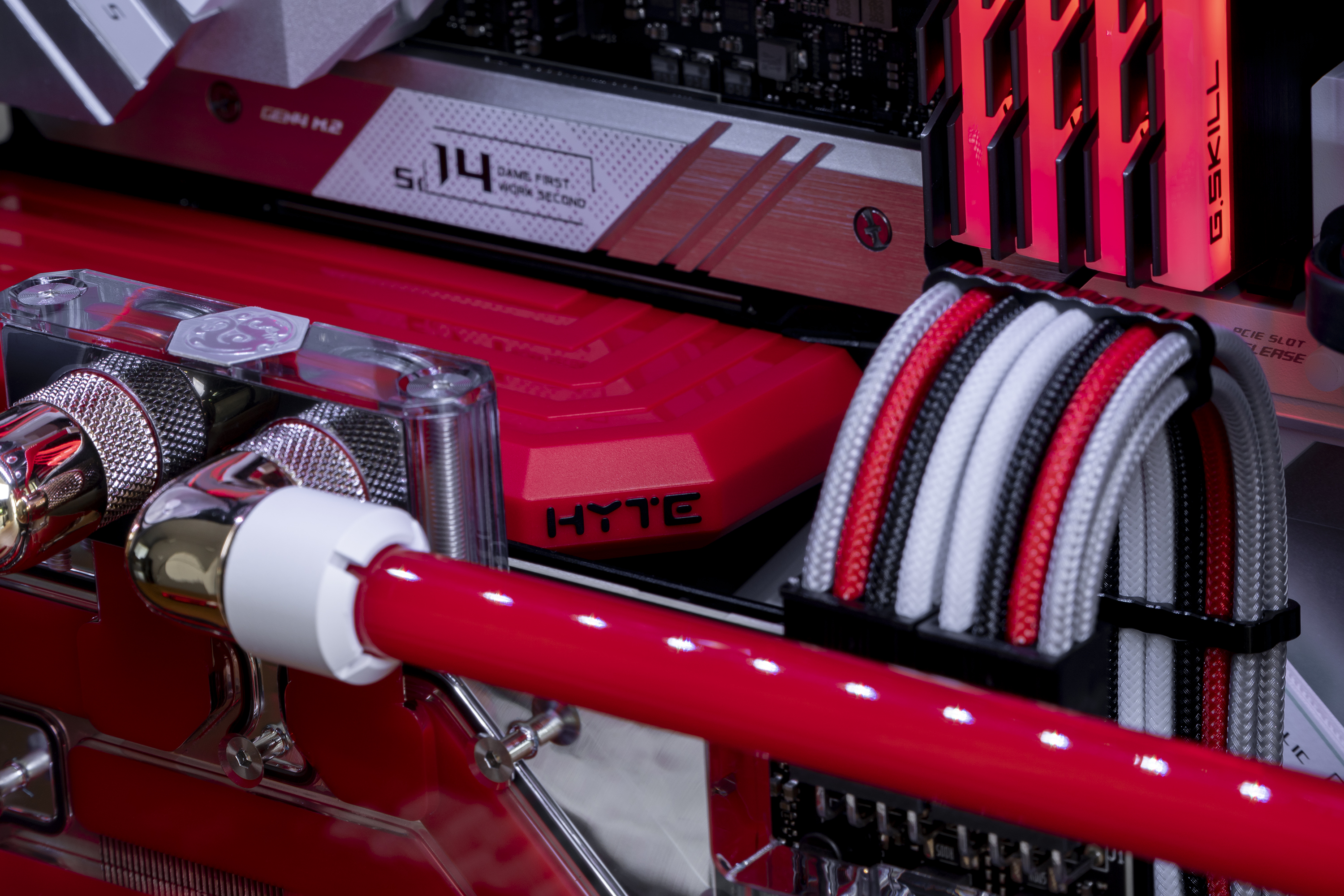 One of the coolest methods of creating mods these days is through the use of 3D models. HYTE was gracious enough to send over the model for the Y60 so that we could take full advantage of what the Y60 is, and what we could do with it.

Another aspect of this industry, however, is being able to accomplish what you want in the timeline that you have. Every project is different for timelines, and it can sometimes become the biggest challenge.

Then the challenge is organizing your mod plan; matching up the actual computer hardware with a solid choice of watercooling components, then fusing those two with the modifications you are planning, all the while managing your timeline. It’s tricky, but that’s what makes it so challenging and fun!

Another thing we love to do at LiquidHaus is mixing and matching brands. Sometimes you can get a great synergy between brand aesthetics or even functionality that you simply can’t find when you decide to go with just one brand, especially for watercooling components.

It’s a really exciting time to go to all of the online retailers and configure multiple carts with various sets of parts for mixing and matching before finally deciding on the build route to take. 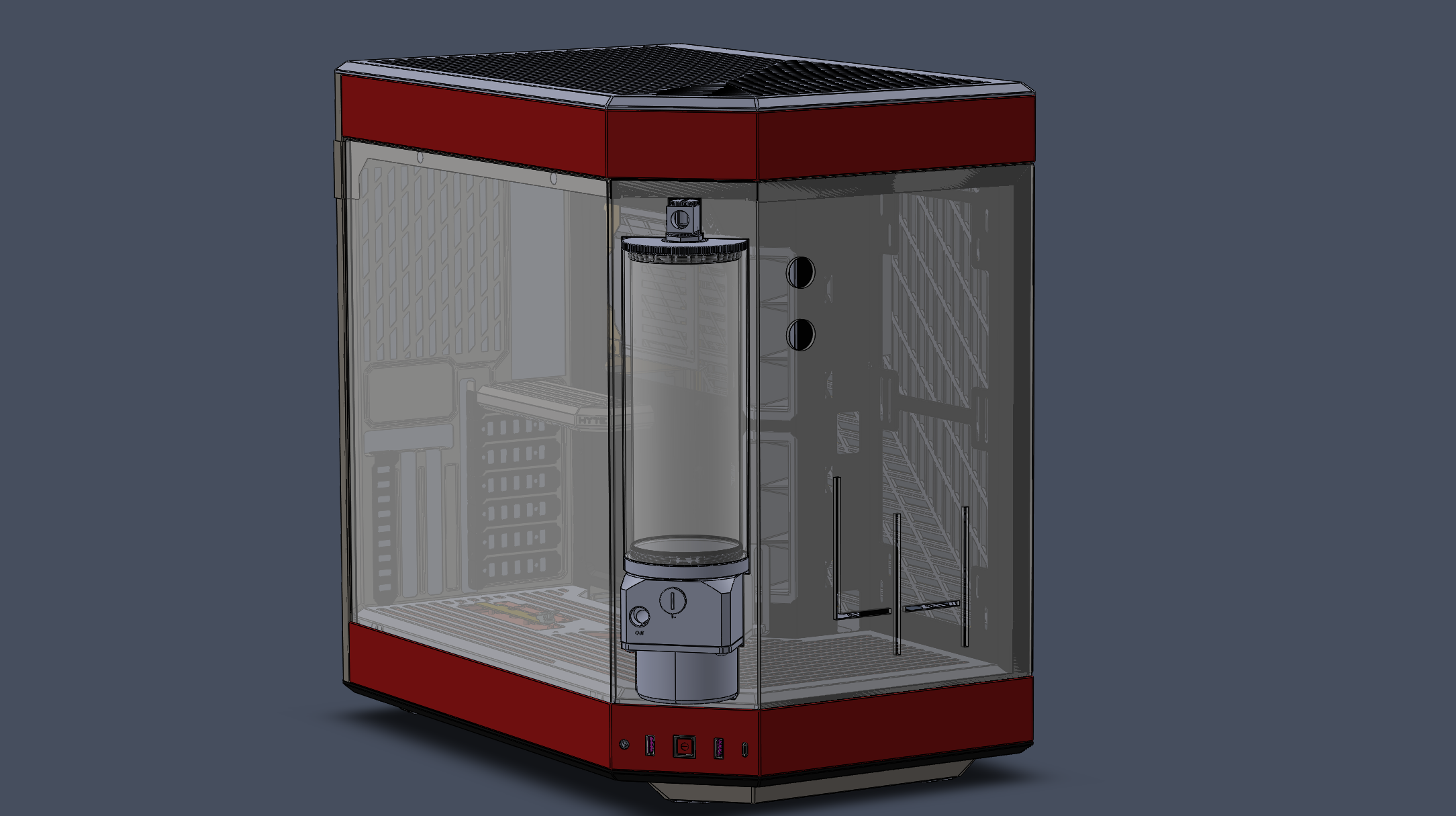 We finally decided the mod should be utilizing the unique 45-degree front corner of the Y60 by placing a massive tube reservoir that is mounted halfway through the panel itself.

With the front part outside of the actual case dimensions, this allows for the reservoir’s tubing to reside outside the case dimensions as well. This can then utilize the front narrow panel as a bulkhead location for the tubing to route back into the case.

This mod choice has a thermal benefit as well. The bottom intake fans and the side radiator fans will be less impeded with the pump and reservoir relocated.

A functional mod is something that we try to pursue as much as possible, over simple aesthetic only mods. A PC that looks cool but doesn’t perform very well simply will not last long, but a PC that performs great will always last longer.

Now that we’ve got our vision in place, its time to start this mod! Jump to the next part in our series to see how we got this build accomplished.